Inn and Restaurant
Since 1992
Home / The Inn

Pousada Alcobaça has been praised by Brazilian and international press and is recommended by travel guides like "Quatro Rodas" in Brazil, and "Lonely Planet" and "Fodor´s".

Just one hour drive from Rio and only 15 minutes from Petrópolis historical center, the inn Pousada da Alcobaça is one of the most charming places on the mountains around Rio. It is a 1914 mansion surrounded by gardens with roses, bromeliads, orchids, wild raspberries and aromatic herbs.
The owners, whose family built the house at the beginning of the last century, maintain the property watching every detail personally. A tradition of the Pousada is the flexible time schedule: guests can sleep late and may take breakfast anytime. The restaurant, open to the public, offers an authentic cuisine du terroir, supplied by a large vegetable garden and orchard in the property.

The old Norman style mansion was refurbished and adapted to become an eleven room inn, respecting the original design, with its wooden wall linings, English tiles, and creepers on trelisses. Among the furniture, some are from the original family house, and all are antique items. 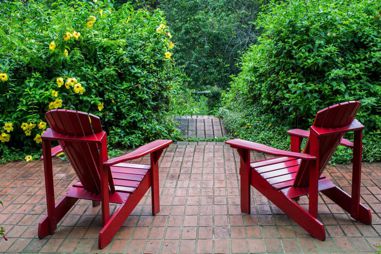 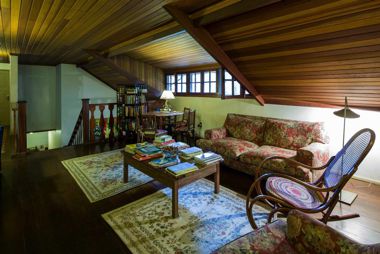 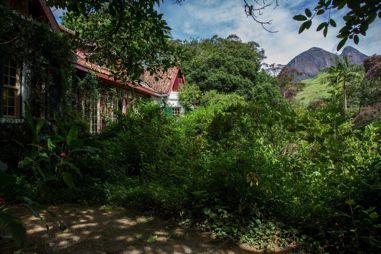 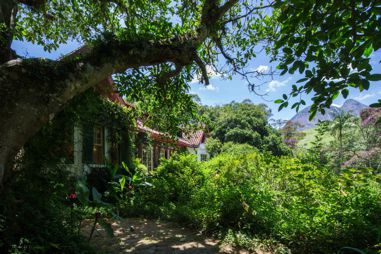 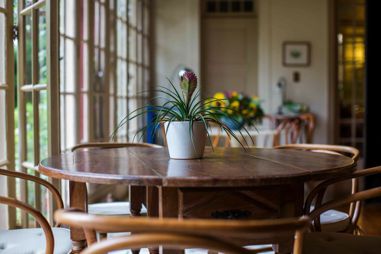 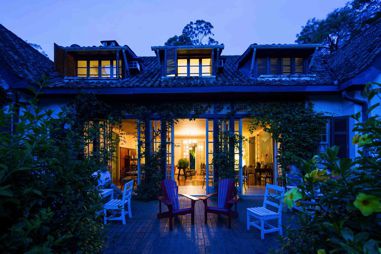 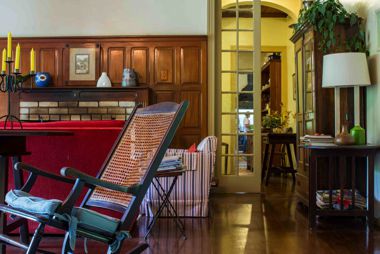 Designed by the owner, they are a nice blend of English style gardens, with lawns framed by many colours, and the exuberance of the Atlantic Forest, with its species like bromeliads, native impatients and creepers. The lake with water lilies and the French statues provide a classic romantic atmosphere. Colours in the gardens change with the seasons: red buganvileas in August and September, red muzaendas in December and January, rose and lilac lent trees in march and April, and wisterias, jasmins and acacias that are worth seeing 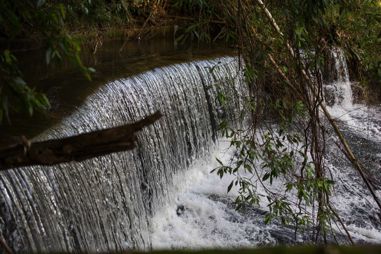 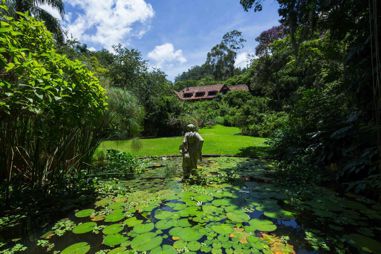 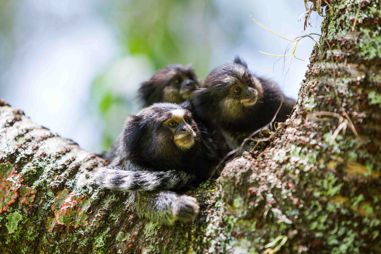 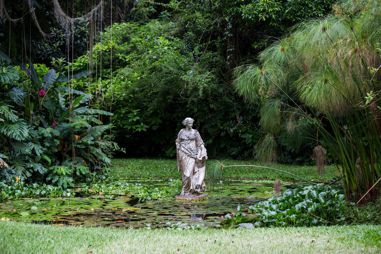 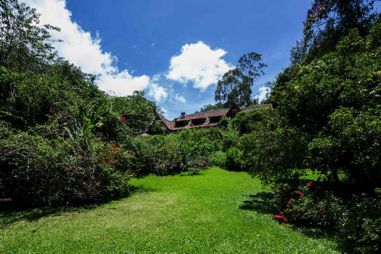 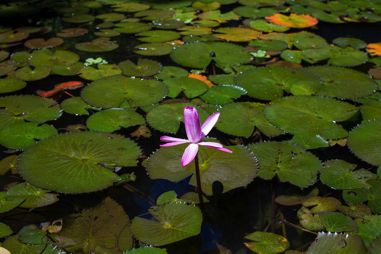 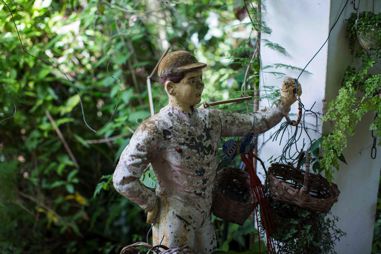 The region offers many options of ecological activities like trecking on the mountain woods and visits to historic sites on downtown Petrópolis (the front desk will help with reservations and advice). Pousada Alcobaça is very close to the União e Industria road, that gives access to Petrópolis and Itaipava, where good restaurants, the Imperial Museum, local arts and crafts shops, ceramic factory, shopping in general and orchid green houses are worth seeing. For those who chose to remain in the Pousada there is a library, a fireplace and a bar with music. 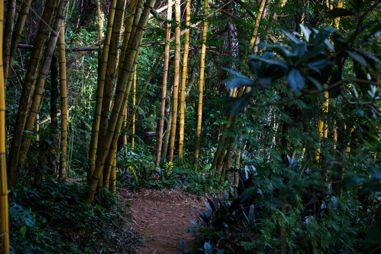 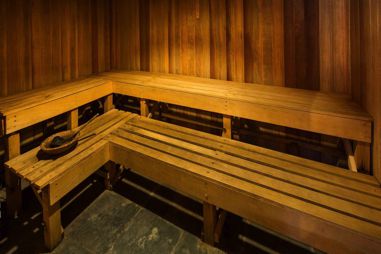 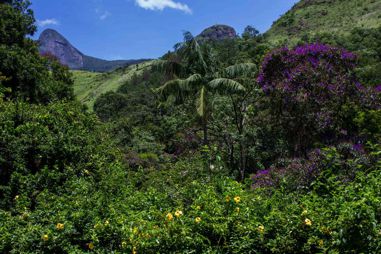 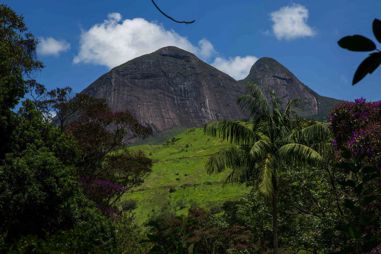 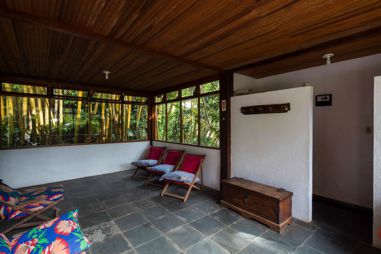 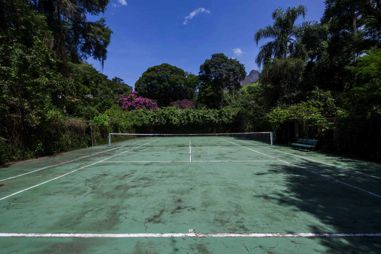 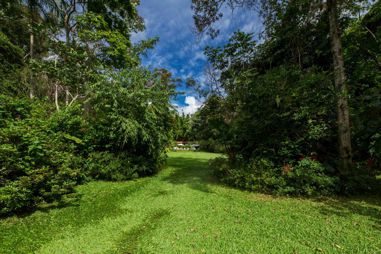 Since 200 years ago people from Rio, the cariocas, move up the hills surrounding Rio for the summer, to enjoy the healthy mild temperature.

In 1857, Emperor Pedro II inaugurated his summer palace in Petrópolis in a land that was before Fazenda do Corrego Seco ( Dried Brook Farm), inherited from his father, and the Court began to spend summers there. The mansion where is today Pousada da Alcobaça was built in 1914 by a steel mill owner for his family vacations, in the district of Correias, in lands that used to be part of the farm of Reverend Correia. This farm was used since the XVIII century as a resting place for travellers heading to Minas Gerais on 'mule trains'. One of these travellers was Sir Richard Francis Burton, English Consul in Santos, in his trip to São João del Rey Mining Co. The watercolour by an unknown English author* (right. Bellow), painted in the grounds of Pousada da Alcobaça in the beginnng of XIX century, shows the mountains called Alcobaças, and proves for how long ago this place has been charming visitors.

Cozido is served on the large kitchen table in big 'witch pots' on the wood stove. The duck has orange and apple sauce and the rabitt has red wine gravy or mustard. Faultless! For the morning breakfast you find pancakes with maple syrup or honey and French toasts. Is there a better Pousada?

Alcobaça is a piece of paradise in Correias, on the montains of Petrópolis. When traveling abroad, I miss Alcobaça more than my own house.

The more urban part of Petrópolis is specialized in another type of hotels, the small pousadas or lodgings, and none is better than Pousada da Alcobaça, in Correias, a little village north of Petrópolis, in the gourmets valley so called due to the number of good restaurants in this area. D. Laura and her husband Mario, both speaking perfect english, a result of the three years they lived in Michigan, transformed the summer property of his family, a 1914 mansion in a charming eleven room pousada, with bed and breakfast, though this description is not fair for at least one of its qualities: the excelent food, cooked under the direct supervision of D. Laura. The garden is a delicate and exotic blend of English country style, Italian villa and Brazilian Forest, with wild flower beds, trelisses and statues.'

The Pousada da Alcobaca is the most charming, most beautiful inn I know in the Petropolis area. Each room is beautiful, and the gardens and surrounding grounds are gorgeous. The owners Laura and Mario are warm, intelligent, lovely people and take great care of their guests. Laura's cooking is to die for. I have stayed three times, and can't wait to return

It is as if the flowers recognized the owner of this excelent pousada, originated from a 1914 mansion inherited from her husband Mario's family (...) Alcobaça's time schedules are determined by their gests. At three o'clock of an autumn Sunday a group of very pretty girls was taking their breakfast while in a table next to them a family was having lunch.(...) Laura's cooking is very well known. 'I kept the grandmothers recipes', she tells.(...) The house cellar, in an old water mill that used to grind corn, is well supplied with international wines

A perfect location. A very beautiful house, a wonderful lawn, with a brook passing behind and D. Laura, who is an extraordinary cook. Wonderful program for the weekend.

(...) Laura transformed Alcobaça in a wonderful place. Inside its 48.000 m2 of land you find a splendid vegetable garden and well kept house garden. Inside, the kitchen has a good reputation.

It is a place of great charm and ample spaces with the advantage of being situated close to Rio.

(...) I called Mlle.D who, just as Mme. R, used to lodge in Pousada da Alcobaça. This way, I thought, I save my Sunday. The place is one of the most pleasant in Correias. Beautiful gardens, excelent food and a correct service. The ladies were already at the table when I arrived, and in front of them a nice duck on orange sauce. Oh, my reader! What a gentle duck. It was well roasted and had potatoes, farofa and two sauces- with pears and plums- and some delicious fried bananas. Pity that I woke late and could'nt eat with more attention the wonderful water bird.

Alcobaça is a projection of its owners, Laura e Mario, people with high cultural level. They have managed to transform a house into another house to entertain people

Situated at just one hour drive from Rio, Pousada da Alcobaça is known for the quality of its lodging and service, within the standards of quality of the owner, Laura Góes. She gives her clients the perfect contrast between country and big city: pleasant climate, peacefulness, and absence of ridgid time schedules

It is a beautiful place and has wonderful food. As a matter of fact, the best place in this Pousada is the kitchen, where I like to sip my cachacinha while seeing the cooks performing.

Pousada da Alcobaça has the best conditions for those who need the quiet and confortable atmosphere to dedicate themselves to intelectual work. It is a rare alternative for those who need peace to research and write. I have spent some months of 2004 and 2005 emprisioned in Alcobaça. The beauty of the gardens with the variety of colours and flowers was a help for my dedication to writing. I alternated my hours of work with some swimming. What really makes Alcobaça a special place are the people, the friendly and competent service of the staff and the delights of the real Brazilian home cooking, to say nothing of the good chat of Laura and Mario who retrieve me from the night solitude. Alcobaça captivated me with its family atmosphere, by the correct and never ostensible reception. I consider Alcobaça one of my houses in Brazil.

Pousada da Alcobaça is located in Petrópolis, State of Rio de Janeiro, 80 kmfrom the city of Rio de Janeiro, in an altitude of 842 m at the mountain range called Serra dos Orgãos. The average temperature in the summer is 18º C. The town of Petrópolis, summer resort of our Emperor a century ago, has several sites of historical interest to be seen. The town can be reached in 15 minutes from Pousada da Alcobaça , situated in the District of Correias, close to other Districts like Itaipava and Nogueira, all in the old trail to Minas Gerais, the former gold mining region.

Guests arriving in Rio by plane at the airports of Galeão or Santos Dumond may ask us for transportation by car or van.
Open Map
Close Map